This is the way to go my friends.
A week or so ago, my Dad asked me if I would bake a cake or two to be auctioned off at the charity benefit his workplace holds every fall. I did this for him last year, and since being in the kitchen creating is (usually) a relaxing, enjoyable thing for me, I agreed.

I picked out 2 new recipes (risky, I know). Dad paid for the ingredients, plus a little extra, for my 'trouble'. ;-)

Last night, I made two cakes, back to back. I was in the kitchen all evening. I was proud of my creations. 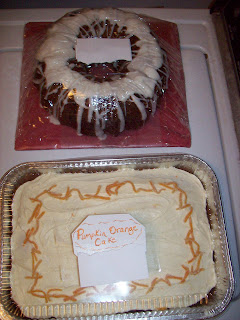 The top one is an Apple Raisin Bundt cake. The second is Pumpkin Orange, and those are candied orange peels on top.

Then at 7:30 this morning, I kissed them goodbye and sent them on their way, with a promise form my Dad to let me know how much money they brought.
He sent me a text in the early afternoon saying the bidding overall wasn't so good and the cakes had brought $20 each. :-P
Later, I talked to him, and found out he had bought one of them - the Pumpkin one. Well, yay! If he was going to buy one anyway, it had better have been mine, and now at least I could taste one of them. I was glad it was the pumpkin one too, because I was more likely to make the Raisin one again to see what it was like.

Even later, Dad showed up at our house, and lo and behold, he was carrying the Raisin cake. I pointed out that was not the pumpkin cake.

Yeah. He knew. He had bought them both.

Okay. So I could be slightly embarassed that I sent 2 cakes away to auction, and my Dad (who had already paid for them once) bought them both.

But lets think about this:
I spent an entire evening in the kitchen and produced 2 very good looking cakes.
And then sent them off without even a taste.
And then they both came back!

I haven't tasted the Pumpkin one yet, but I can tell you the Raisin is magnificent! :)
Worth every penny. ;)
Posted by Amy at 7:28 PM

Email ThisBlogThis!Share to TwitterShare to FacebookShare to Pinterest
Labels: Fluttering in the Kitchen