For Week 2 of our bird study we took a quick look at birds of prey, learning mostly about owls, and touching on hawks and eagles as well.

As usual, we started with a stack of books from the library. 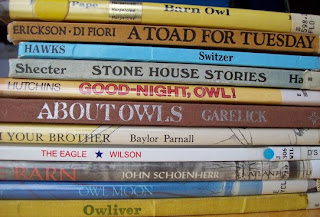 A Toad for Tuesday was a great fiction read-aloud, and About Owls was an excellent non-fiction...well ... about owls!

I decided to try something different from our usual narration this week, and it was a hit!  Instead of having Dale recite owl facts to me, I asked him to tell me a story about an owl, including accurate facts.  He did a great job, including an illustration, and had fun with it, too!  He colored a realistic picture of an owl from here, which we glued to the back of his story.  That page went into his notebook to sum up our study of owls.

For fun, he and Alan each made one of these (found here): 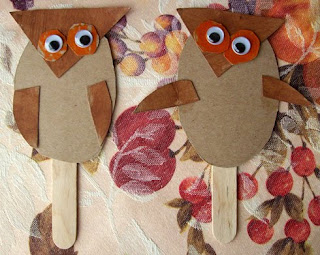 This would be a good place to note that Alan had his own stack of owl story-books from the library.  I like including him when we read about a topic.  I think I've mentioned that before.  :)

After owls we read a book about eagles which gave a short description of their habits, etc, along with highlighting their significance throughout history.

We also had a nature book about hawks, and one titled Hawk in the Sky, by Franklin Russell.  I cannot say enough good things about Hawk in the Sky.  Originally published in 1965, it is a four-chapter, 60 page narrative-nonfiction detailing the life cycle of a hawk.  With illustrations on each page and an engaging story-line, it both held Dale's attention and gave us lots of facts about hawks!

Apparently this was the week for trying new things, because instead of our usual drawing or coloring for science, I decided to have Dale try his hand at tracing.  Once again - he loved it! 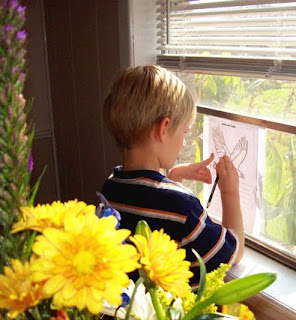 (flowers in the foreground courtesy of a 'Just Because' bouquet from my sweet husband!)

He traced, then colored, an eagle onto the top of a notebooking page we titled Hawks and Eagles.  After narrating a few details about each bird, that one went into his notebook and successfully wrapped up our week on birds of prey!

Email ThisBlogThis!Share to TwitterShare to FacebookShare to Pinterest
Labels: Homeschool

You are so creative! Your boys are very lucky!

Tracing...hadn't thought of that one! I bet my girls would love that!!

Oooh, we haven't traced in a while... I'll add that to the boredom-busters list for our gray afternoons!
Love the 'just because' bouquet- I got on of those last week! What a blessing (I don't get them very often- it was a very sweet surprise!)
Enjoy them-
ali