We went to a parade today.

It amazes me the things that can pop up and make me emotional. Who knew police cars and fire trucks could bring a tear to the eye? But I stood there this morning in the beautiful sunshine holding Alan for the first parade he's ever really seen, and could have just about cried. (The ones when he was an itty bitty baby don't count). ;) 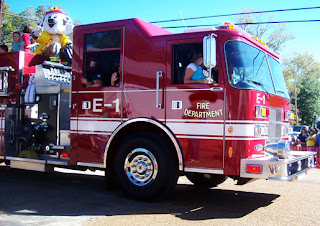 And while Alan, being not quite 2, couldn't anticipate the parade, Dale, on the other hand, could. And he was very into it.

He started out taking pictures (he took the one of the fire truck above), but I think that interfered with his parade-watching.

Here he is after he had his fill of parade photography. (2 police cars and one fire engine later) 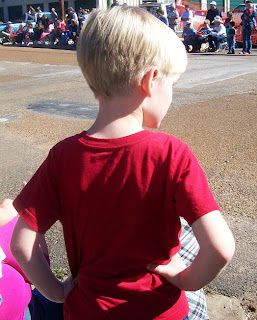 Note the hands on the hips. Some very serious viewing going on.

But he spent most of his time like this: 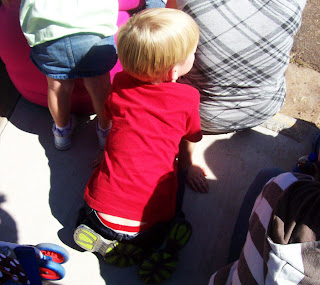 Why he preferred crouching down and peeping through the crowd instead of standing and looking over their heads toward what was coming Grandma and I couldn't figure out. And of course, it wouldn't be the same without the underwear showing.

That didn't bother him though. His eyes hardly moved from the bands, floats, cars and trucks.

One of the bands was "Daddy's band": 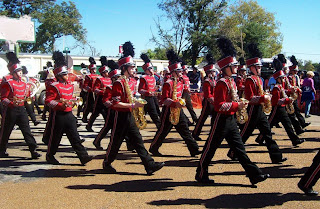 And of course, we stayed all the way to the very. last. thing. (One more police car for good measure, and it passed by us exactly 1 hour after the first police car crept by, siren wailing. There were over 75 entries!)

We have seen parts of all 4 seasons pass in the hospital. We have celebrated birthdays and some holidays. While most do, there are some children that don't win their battle against liver disease. Alan's had his fair share of bumps along the way, and that just makes days like today all the more precious. 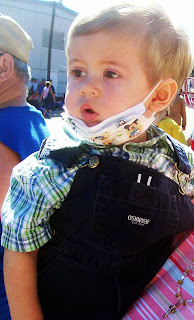 I've never enjoyed the sirens as much as I did today, in his presence.
Posted by Amy at 3:22 PM

Email ThisBlogThis!Share to TwitterShare to FacebookShare to Pinterest
Labels: Life with a liver kid, Out and About, Special Days

I love parades! Unfortunately, it seems like most I've been to are in the winter. Winter parades = cold noses, short attention spans, and cuddling under a blanket. Plus hot chocolate once safely home. Good times. :)

What a cute Alan picture! There is just something about tiny noses and little lips that gets me grinning every time! :)

I know exactly what you mean about a normal day being extra special.

Wow...I am sooo glad you got the chance to do that with Alan!