After a couple of over-filled and stressful Tuesdays (story-time at the library and other outings) ...
and getting tired of never being able to make the time for extras like science experiments, art projects, etc,...
I decided to eliminate most of our regular school work from Tuesdays and fit in one or two of the fun things.

Today was the second week of such a Tuesday and I think it's going to work for us!

Not only did the day go more smoothly and pleasantly, we all enjoyed some hands-on work.

Alan is doing Five In a Row this semester, and both weeks our inspiration has come from the science section of his current book.

Last week was The Little Red Lighthouse (in which a big bridge is built), so we built bridges from index cards, made our predictions, and tested their strength with pennies.  (From this site.) (and I didn't take pictures! bad blogger. But fun Mama!)

This week's book is When I was Young in the Mountains, and one of the suggested science lessons was snakes.  We checked out several snake books from the library today and spent some time snuggled up on the couch reading through them together.  Later I had the boys give me some snake facts, which I wrote on our chalkboard door.  We then made a flip book and Dale and Alan wrote a fact on each page.

We also did a couple of water experiments today.  One was this displacement experiment from Kids Activities Blog.  We filled a cup to the brim with water and carefully added pennies, watching the water swell up to the top and finally spill over.  Tyler won the award for 'most improved' with this one; he started throwing them in like you would chunk a penny in a fountain, and ended up being just as careful  - or more so! - as the other boys.

To finish up our science day we did one more water experiment.  If you look at kids' stuff at all on Pinterest you've probably seen this one. 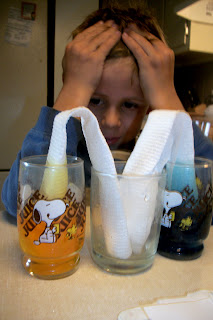 And it worked!  We have 1 blue paper towel, 1 yellow paper towel, and an inch of green water in that middle glass all sitting on our kitchen counter right now.  The boys wanted to leave it sitting over night to see what would happen next.  And I agreed. Ah, the life of a scientist!

Happy Tuesday! Just might be my new favorite weekday!
Posted by Amy at 9:13 PM

Most improved! HA!
Love your new Tuesday schedule. It sounds like a winner!

You must keep us 'posted' on the paper towel experiment! Inquiring minds....and all that.....

Sounds like our Thursdays! Music lessons, art, science, and any leftover catching up stuff too. Nice.