School for all ages

I have often read on blogs and other places that it is common for preschoolers to ask to 'do school' with their older siblings.  As I have seen for myself that Alan likes to stick close by, busy with an activity of his own (or just like  Dale's) while Dale does school work, I didn't doubt that the day would come that Alan would ask to 'do school' too.

I just didn't think that day would come so soon!

I had a hard time holding Dale to the table today, since we got a late start and his friends were already outside.  And since at this age I would rather him be outside playing than at the table doing school work anyway(shhh... don't tell Dale that!), I let him go.

But Alan lingered inside, and the next thing I knew he was leading me to the table, asking to 'do school'.

And since here I was, a teacher without a student, it didn't take much to convince me.

Steering him away from gluing Dale's handwriting book shut, we found something better to glue instead. 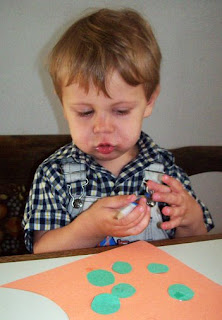 The first thing I was able to put my hand on was green construction paper.

And since we are working on learning shapes and colors, why not glue green circles? 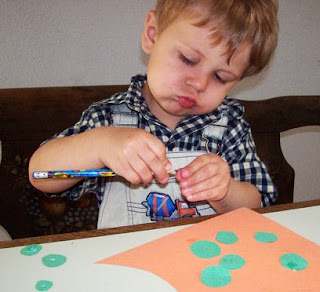 Not sure what the pencil had to do with it, but one can't properly 'do school' without a pencil, now can he? 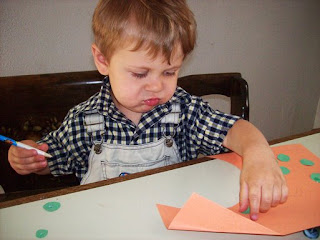 Before long, he wasn't satisfied with just Mama doing the cutting.  'Doing school' requires scissor work as well.  Of course. 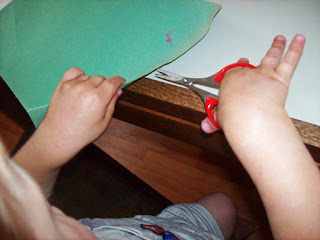 Those don't quite qualify for safety scissors (which Alan does have a pair of, btw).  Time to put the camera down and get four hands on the action!

I loved that Alan got some time cutting, gluing, writing, and making, and it was just as satisfying to him as if I had sought out, planned for, and prepared a 'real' project or craft for him to make.

Sure, we'll print patterns and follow directions and make 'real' stuff plenty of times, but spontaneity and simplicity have a lot going for them too. 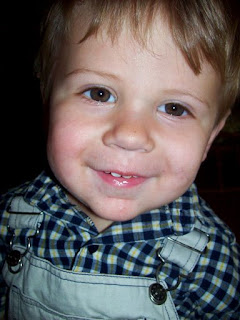 Email ThisBlogThis!Share to TwitterShare to FacebookShare to Pinterest
Labels: All things Alan, Homeschool