Every baby needs a mockingbird

Another two week stay at Children's. Ugh! This is getting to be waaay too regular of a thing!

And I don't have much witty to say, but I'm so tired of my blog being neglected... I'm just jumping in! I think I have mentioned before.... the hospital server blocks blog sites. So I can't get to my own and I can only read those that I have in my reader. But at home I dont use a reader, so I don't ever think to update it with lotsa blogs so I have good stuff to read when we ARE in the hospital. And then.... the few blogs I DO have in the reader, I can't see pictures or leave or read comments. So..... I'll be catching up the next few days. :)

Funny story:
Alan makes a pig snort sound for most animals, including dogs. Last night just me & him (is that correct grammar? .... he & me? I dont think it's "I" because I wouldn't say "just I"..... ANYWAY).... it was just the 2 of us at RMH, and it was bedtime. All the lights were out and Alan was in his portable crib/playpen thing. Sometimes away from home he needs a little extra help going to sleep, so I was patting his back and singing 'Hush little baby' (a great song about over-indulging your kids with useless stuff, which, oddly enough, I sang all during Dale's babyhood and Alan's first 17 months and left out 2 whole verses. I was skipping the whole "dog named Rover" part).

ANYWAY... so there we were in complete darkness. I couldn't see if my patting and singing were getting me anywhere or not. All was quiet except my sining....
"and if that cart & bull tip over, mama's gonna buy you a dog named.."
SNORT.

Oh my goodness. Have you ever tried to sing, especially sing soft & soothingly, while trying to hold back great big waves of laughter?
Extremely difficult.

But I somehow held it together.

End of lullaby. We gave up and re-attempted bedtime (succesfully) 15 minutes later. :) 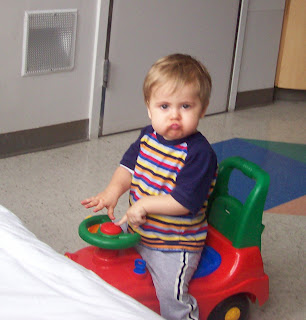 Email ThisBlogThis!Share to TwitterShare to FacebookShare to Pinterest
Labels: All things Alan

Funny! I'm glad you're back home.