There. I said it. I held off for a few days, thinking I could skirt the issue or ignore the feelings, but the truth is, I am not a happy camper.
About a week ago, I took Dale to one of our usual weekly 'outings'. Toward the end of the scheduled program at said outing, I noticed a small snotty child receiving some assistance on some serious nose-wiping. 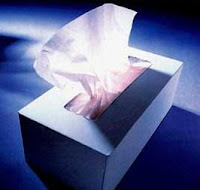 Great.
Dale and I used hand-sanitizer as soon as we got to the car, and washed hands as soon as we got home, but even though I had hoped otherwise, the damage was already done.
A few days later Dale was a sneezy, snotty mess.
Great.
Sure enough, 24 hours later, Alan was a little snot-ball himself.
And, not surprising when you live with a snotty toddler, within another day or two Greg and I had succumbed as well. (And for the record, Greg is fanatical about hand-washing!)
Now, I felt such pity for Dale when he had his afternoon sneeze-athon. I bet the poor boy sneezed 75 times. I hated it for him!
And it is beyond frustrating for the parents to be a sneezy-runny mess themselves.
But here's the thing. Within 24 hours Dale was just about back to his usual self. And Greg and I will bounce back pretty quick as well.

But Alan? Well this "little cold" has gripped him the hardest. Unless medicated, he hasn't slept well.
His cold is the only one to come with a cough.
For a person that needs extra fluids anyway, to have fluids draining from his body via his nose just ups the amount his parents must make him drink.
And I can assure you, he will be the last one in the family to be rid of his cold. His little body will take at least twice as long to fight off those germs as the rest of us.
And then....
There are those thoughts in the back of my head.... will this develop into something more?
Will it involve a doctor visit? A hospital stay? Will it mess up the balance of his medication? Will his immune system kick in a little too much to fight a "little cold" and irritate his liver?
And that my friends, is why I am angry. Someone decided that a "little cold" wasn't reason enough to keep their kid home last week.

I had let down my guard and wasn't diligent enough to notice before it was too late, and my kid and their kid shared art supplies.
And germs.
So yes, it's just a "little cold", but to some families a "little cold" is a Big Deal. So please, please remember us the next time you decide to head out to the store, or the library, or church, or the playground, or school with your little one who isn't feeling well. Believe me, I know it isn't convenient to make other plans, but the rest of us would prefer not to suffer for your convenience, whether we have special medical needs or not!!
P.S. At the risk of sounding incredibly hypocritical, I have to acknowledge and apologize for not following my own advice and heading over to my parents' house with snotty kids in tow. Thanks for having us (and our germs) over to visit. We'll try to refrain from being so generous in the future!!
Posted by Amy at 2:50 PM

Email ThisBlogThis!Share to TwitterShare to FacebookShare to Pinterest
Labels: Life with a liver kid

Wow...I sure hate to hear my Texas family is having the germ war! Get well everyone..
Love ya all

I can't imagine! I am sorry your sweet boy is sick. Hope everyone stays healthy this "germ" season. I bought the girls their own little hand sanitizer on a carabiner clip that goes on their backpack. Anytime they are going to eat, they go clean their hands. I don't know if it is helping--all 3 of them have colds right now. But we are trying!