I did the right thing

We have a mega book of crafts for kids at our house, and Dale loves to peruse through and find something to make. I try to say 'yes' as often as I can, since I WAS the one to buy that book and put it on our shelves.

Recently he picked out a project to be made from little nature tid-bits: leaves, seeds, twigs, etc.
After having a big ol' time gathering up all his outdoor goodies, it wasn't going so well for him, and his constant bouts of frustration and near-tears and requests for help was driving. me. crazy. I was working on something else and didn't really want to make an art project just at that moment.
Finally, he whined in frustration one more time. The kind of whine that could very easily brought me to the point of sweeping up the entire project and sending the artist off to do something else. But, thankfully, for whatever the reason (God's grace on my parenting that day?) I dropped what I was doing, grabbed Dale by the hand, and headed outside to find some more suitable materials than what he had gathered to work with.
And y'all? That was the best thing I have done in a week.
He was absolutely thrilled to have me out there with him picking up leaves and plucking dried twigs... working on his project. He was so excited with everything I found, and actually very thankful for my help! With our new finds, he was inspired to try again and finished his picture. He was so proud of the final product as something he had seen in the book and made his very own.
And I was inspired to say 'yes' more. To put down whatever I'm doing that feels so important at that moment and turn my full attention to my boys. To spend the extra energy when I am tired to give them what really is so little, but seems like so much to them!
I even thought about saving Dale's picture as a reminder of the sparkle in his eyes the afternoon Mama joined in. Except for the fact that it is made of sticks and leaves and dried cicada shells. Ew.
So I wrote a blog post instead. :) 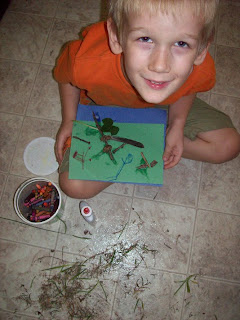 Dale loves to make things! What about your kiddos? What are their favorite art projects? Can they do them independently?
Posted by Amy at 9:30 PM

Email ThisBlogThis!Share to TwitterShare to FacebookShare to Pinterest
Labels: But seriously..., Dale's Days

My kids like to make anything and everything. We have the craft room full of supplies. They have to ask for some things (like paint after Emilee painted her foot and stepped on the carpet) but they pretty much have full rein.

Right now they are super excited about fall, so they all spent yesterday making pumpkins of various sizes and shapes and colors. We are going to use them to decorate!

That is so wonderful that you spent time with him to help him get his supplies just right. It is a memory that I am sure will always be with him. I am reminded of my niece who is grown now but has a similar memory. One day when she was around Dale's age, she was trying to bead a necklace. She kept crying and carrying on when it would fall apart. I told her making jewelry should be fun, not a misery. I asked her if I could help. She said "I just want to make a pretty necklace for you." I asked her if I could at least hold it while she designed it for me. Neither of us have ever forgotten that. Those kind of memories make the best ones.