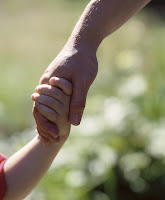 As any parent knows, it seems parenthood is one of those jobs that is constantly changing and evolving. While many of our objectives will always remain the same, our methods for meeting those goals must be adjusted as our children grow, and as we as parents learn and grow as well.
Because of that learning and adjusting, we are trying something new at our house. Greg and I recently realized how often we found ourselves correcting Dale. But more than just correcting, we were explaining. A lot.
"Don't do that because.....". All we were trying to do was teach right behavior, but we were wearing ourselves and our kids out doing it.
Through God's leading and using a couple of books we were reading, we decided what we needed was a set of broad, memorable rules or guidelines for our family. The constant correcting and explaining was overwhelming for a 6 year old, and it became clear to us that part of the problem was that Dale didn't clearly know what was expected of him. A lot of our talking, teaching and explaining was lost on him because it was too much!
Modeling after The Duggar's family guidelines, and a few others we found on the internet, Greg and I made up a lengthy list of potential rules for our family to adopt.

After making our preliminary list and then, with Dale's input, narrowing it down considerably, this is what we are starting out with for our family:
J.O.Y. - Put Jesus first, Others second, and Yourself last. Make serving your family a priority.
Obey immediately and cheerfully.
Use soft, kind, truthful, meaningful words.
Show joyful attitudes, even when no one is looking.
Always make your actions loving, joyful, peaceful, patient, kind, gentle, and full of self-control.
Do not argue.
Be respectful.
Never squeeze hard.
"Never squeeze hard" was Dale's contribution. We left it in so he would feel some ownership of these new guidelines. Apparently there has been some squeezing going on we didn't know about??
Some of these have been tailored specifically for our boys and behaviors we want to eliminate or character traits we want to develop in them. Others we see as just good general parenting sense.
I never thought we'd be a family with a set of rules posted on the wall (or the refrigerator, as the case may be) but for us it has been freeing. While I thought it would complicate things, the effect has been the opposite, and our parenting has been greatly simplified. Almost every behavior that needs correcting fits under at least one of those rules. And if it doesn't, we question ourselves to see if it is something that actually needs correcting or is just the result of a kid being a kid.
We kept our list as short and concise as possible (difficult for us - we are both wordy people!). However, we wanted our kids to easily be able to know these expectations by memory, so they can almost correct themselves. We can ask, "what kind of words do we use?" Dale can list them, and then we ask, "was what you said (kind?) (soft?)" And the teaching then almost does itself!
We have also found we sometimes need to be more careful to hold ourselves to those standards as well, as all of these things are based on biblical truths that apply to adults as much as they do children. (Except that squeezing one. Not sure if that is included anywhere in the Bible or not!)
What about your family? Do you have a posted set of 'rules'? What do you call them? Do you have set, standard consequences for each one?
Posted by Amy at 2:26 PM

Email ThisBlogThis!Share to TwitterShare to FacebookShare to Pinterest
Labels: But seriously...

I LOVE THESE!!!!!! (exclamation marks intended) I am so going to talk with Chad about this. I have set rules in my classroom...why not at home? What a wonderful idea!

Scott and I have been struggling with this as well. I LOVE your list, may we borrow some of them?! I especially love the last one. I think we'd have a similar one like "When Little One screams that means stop touching her":)

Mom of these kids said...

Thanks for visiting my blog! I love these rules. I really like this idea. I think that if it works for the Dugger's it should be worth a try...they really seem to have together!

I love this idea!! I am often amazed when I see parents (in stores/restaurants/etc) trying to negotiate the equivalent of a legal document with their children in order for them to obey.

Love the JOY...do you know the song for that??! Great.

If you guys decide to implement these or something similar I would love to know how it works out for you! We all have to stick together, ya know?

Jennifer, I know "I've got joy, down in my heart..."
... is there a different song that includes the Jesus, Others, Yourself? That would be great!