Knowing for a few months now that we would be going to San Antonio, Dale and I prepared ahead and spent a few weeks this summer reading up on Texas history.

I knew it would be much more meaningful to visit the Alamo if he knew what happened there.
Sure enough, after reading the stories of Davy Crockett, Almeron & Susanna Dickenson, William Travis, and the many others, Dale was very much looking forward to visiting the Alamo.

What better way to start the day than with a Texas waffle? We added a pat of butter for San Antonio, and one for Amarillo, where Mimi & Gramps were visiting recently. (Locations are approximate, lol.) 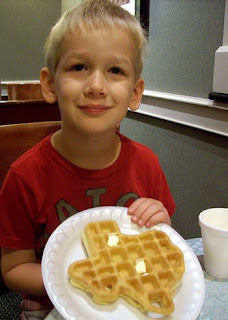 If you have visited the Alamo you know it is virtually impossible to get a good close up picture of your family while including the signature arch / dome shape on the top of the Alamo. You can get one or the other. Not both. I went for the faces. Trust me... it's the Alamo, 'kay? 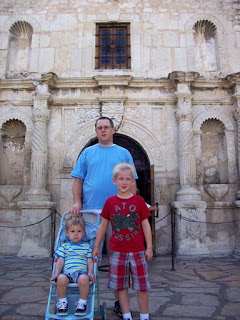 You aren't allowed to take pictures inside, but Dale looked at every single flag representing the homeplaces of the men who fought at the Alamo, reading each one to see how many were from each place. He also loved the scale model of the Alamo grounds of 1836, and studied them for quite a while.
Another thing Dale thoroughly enjoyed were all the cannons scattered around the grounds.

He tells me he pretended to fire each one. 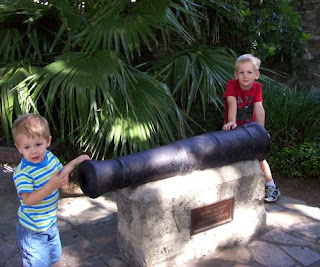 Hopefully not while Alan was standing in front of them!
We also went through the long barrack museum; the highlights there were the short video presentation done by the History channel and seeing William Travis' ring he gave to 1 year old Angelina Dickenson just before the historic battle.
And finally.....

The most unique part of our visit to the Alamo took a little searching.

You see, we've been reading a book about The Alamo Cat, a little cat named Ruby that lived on the Alamo grounds from 1981-1986. We had read that Ruby was buried on Alamo grounds but weren't sure of the exact spot.

After searching the entire perimeter we still hadn't found a marker, so while Dale and I finished up in the gift shop, Daddy did the only sensible thing: ask!

Sure enough, he was pointed in the right direction, and pretty soon, we could see through the locked gate to the Ranger offices a little marker under a tree: 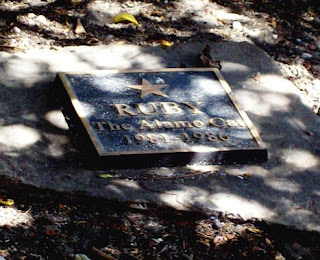 Ta-da! Mission accomplished! And in the process we learned there is another Alamo cat hanging around the grounds these days, named Cici. We didn't spy Ms. Cici on our visit, but if you visit soon, keep an eye out for the Alamo Cat!

Email ThisBlogThis!Share to TwitterShare to FacebookShare to Pinterest
Labels: Homeschool, Out and About, Special Days

Sounds like you all had a very positive and eventful Alamo experience. Dale will probably always remember it.

Just tell me - was it scorching hot!! You guys look great - not melting!!