Today we went a little further and returned to Tuesday morning story time at the library.

It was our first time to use the double stroller we bought the day before he was born. 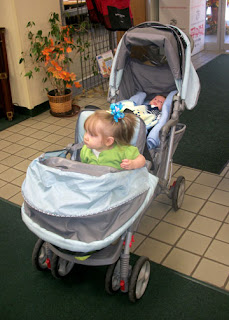 For a person who doesn't like to stand out or make a scene, having 5 kids in 9 years will definitely take you out of your comfort zone.

Nothing like coming through the door pushing a double stroller and toting 5 kiddos to make heads turn.

Surely it is understood, but I can't leave it unsaid: Of course they're worth it.  :) 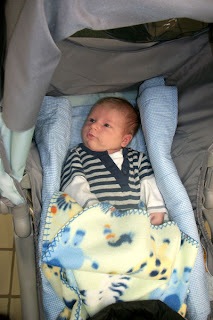 Today was a much-anticipated day for us at story time.

Dale has been helping with the opening puppet show for several weeks now.  Recently he wrote his own script.  It was supposed to be performed on my birthday (not for my birthday, mind you, just on my birthday).

But Daniel had other plans and we were busy coming home from the hospital that day and didn't make it to story time.

So Dale's debut was delayed until today. 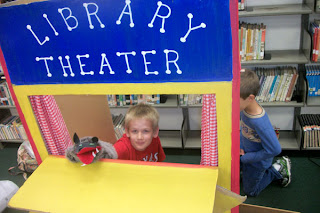 His show was a smashing success with the preschool-kindergarten crowd. 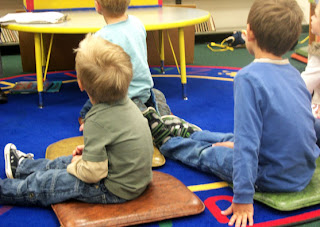 It was nice to regain a little bit more of our pre-baby routine!
Posted by Amy at 11:29 PM

Email ThisBlogThis!Share to TwitterShare to FacebookShare to Pinterest
Labels: Dale's Days, Out and About

You guys are looking good! Wish I could have been there for Dale's debut!