I didn't have a book in mind for Children's Book Tuesday until this one kept coming up: 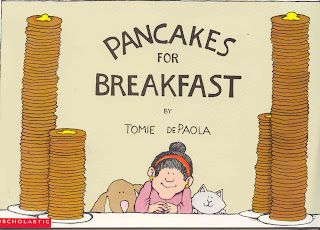 Or rather, until someone kept choosing this one to be read over and over again!
Alan is especially fond of pancakes, and when Mimi brought this wordless picture book home from the library for him, we felt pretty certain it would be an instant hit.
We were right.
Ironically enough, Alan is at my elbow as I write this, asking to read it again (even though we read it twice before his nap), and is pretty excited to see the cover image on the computer screen.
Therefore, my review will be short, as I am hearing a steady stream of "mama pleeeease let's read it pleeeease" as I try to write.
I think that in itself is review enough, don't you?
For more children's book suggestions visit The Joyful Chaos.
Posted by Amy at 4:00 PM

Ooooh, we'll have to check that one out! My munchkin loves pancakes.

i love that he wanted to read it right then!

by the way, we did a lapbook to go with the mitten last winter - the kids loved it (we even printed off the masks from jan's site and they "performed" the mitten for their daddy when he got home from work) i'm sure you're already on top of it, but i got the lapbook from homeschoolshare.com.