Look what I did!

I have been wanting for several weeks now to bake bread. Baking bread is something I've done just a handful of times in my life, but I think it is something I'd like to do more.

Last Saturday on my big grocery trip, I bought a 3-pack of yeast to do a test run or 3. I figured if I had decent success with those 3, then next time I might buy a jar.

I didn't have a plan, except for to strike when inspiration did.

It turns out inspiration came yesterday. It rained all day, with the promise of snow to come during the night. I was planning a salmon chowder for supper, and all I could think of to go with it was a nice crusty bread.

I remember reading somewhere recently that it isn't good to bake bread on humid days (is that true?) but there are more humid days than not around here, and I really, really wanted hot crusty bread to go with our chowder.

So off I went. And do you know what? For all the hype, I didn't think it was that hard at all! People carry on like it is something really difficult and a lot of trouble, but I thought it was fun! And I was so happy about my results: 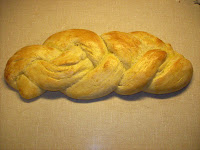 Isn't it pretty? I'm not sure why I went with a braided bread.... I think it was the fact that I was so hung up on wanting the bread to be 'crusty' and that was the only recipe I found that promised that.

Next I plan to tackle using an actual loaf pan. Hopefully for sliceable bread? And wheat flour!

And yes.. the bread is sitting n@ked on the counter. I was in a hurry to take the picture, and I coudln't think of anything right off hand to put the bread on, so the counter it was. Because the sheet it was baked on is UG-LEE.

But let me tell you.... that bread was the perfect thing to go with our chowder. And ... (shhhhh.....) we ate it all in one sitting! Or almost all. The last little butt end was my breakfast this morning with coffee and orange marmalade. Mmmmm. :)

And.... in case you are interested in the Salmon Chowder, which was also very good, I'm including the recipe below. But be warned: cooking fish soup can totally ruin a good 'fresh baked bread' smell!!! :)

Salmon Chowder, my way:
I didn't have smoked salmon. I used the canned stuff. De-boned. And I poured the juice in too, for good measure.

I didn't have any green pepper. The chowder managed just fine without it.

I used a pint jar of frozen chicken broth from my freezer. Thawed, of course.

I didn't have any dill. I thought about pouring in a bit of dill pickle juice, but (wisely) decided against it. I used a teaspoon or two of lemon juice instead. Brightened the whole thing up very nicely.

I didn't have any parsley either. Oh well.

I followed the directions for assembly except for the stirring constantly after adding the salmon. I wanted to still see chunks of salmon in my bowl, thank you very much.

We lit a candle during cleanup and the fishy smell didn't linger a bit. :)

And, back to where I started this post... the bread. More bread will defintely be coming. Do you have any tips? Recipes? Suggestions, hints, or ideas? I can hardly wait for my next loaf.... maybe tomorrow! Depending on the humidity, of course. ;)

Email ThisBlogThis!Share to TwitterShare to FacebookShare to Pinterest
Labels: Fluttering in the Kitchen

I can almost smell that bread, I tell ya!

Great looking bread! I make my own too and I still don't understand why people think it's so hard. You might want to check out this awesome book: The Bread Bible from your library or even buy it, as I did, because it has hundreds of great breads!

But once you get the tempeture right, I think it is easy peasy.

Your chowder recipie sounds, SOOOOOO good! I think I'll try it sometime this week. Thanks for posting it. :)

mmm! I wish I had smellivision! Thanks for stopping by my blog. I love your blog! It's darling! And you have a beautiful family. I'm puttin' ya in my favs. Have a blessed weekend!

I love homemade bread but have not ventured there myself. I am planning to. I do biscuits and pizza dough homemade but the bread seems like a large challenge. I was glad to read that you did not think it was that hard. Yours looks yummy!

Hi Amy! Nice to 'meet' you! Thanks for stopping by my blog. You should join in a meme or two now and again, they are fun! Have fun with the lapbooking. There is a LOT of free stuff online, stop by my blog for some great links if you'd like. Your bread looks delicious & the chowder has my mouth watering!

I'd like to try making bread some time, but I'm intimidated by the yeast and the fact that it has to sit around and all that junk. I like quick things! But maybe I should try it sometime. Yours looks great!